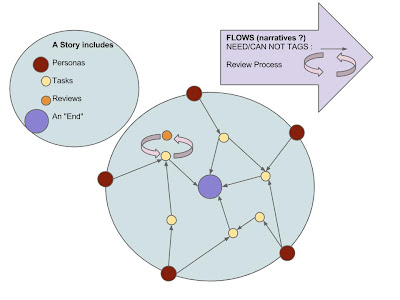 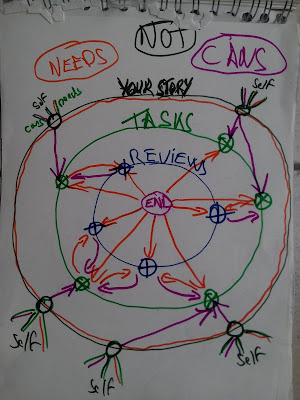 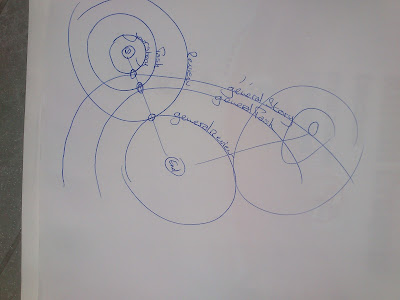 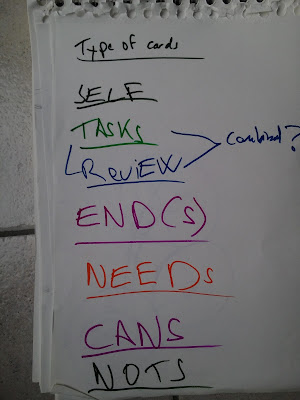 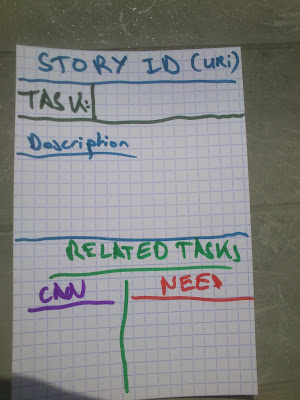 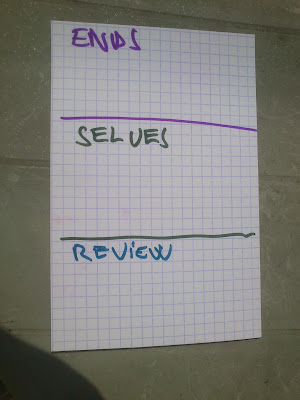 Notes
Cards can be linked to netention objects and the content of the card can become tags, personas, etc in a semantic environment.

The cardboard is a data visualization system, by using strings, it can be turned into a gantt project diagram.

The end can be defined by the tasks and reviews, and vice versa.

Cards could be printed from netention, with barcode or any ID system.

Even money can be used as a metadata currency.
The unique ID can be linked to any netention object...
Publié par Nirgal à 4:16 PM 1 comment:

Semantergy ~ The Meaningful Trace we Co-Create

Contextualisation : personal quotes from this thread on P2P discussion group about stigmergy (which i recommend reading). 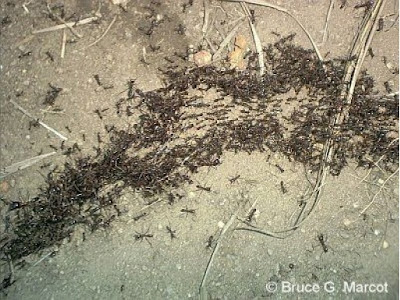 Semantergy = Sentient beings acting like ants, in a hive mind composed by individual minds which can be considered as quantum biocomputers (in terms of potentiality). 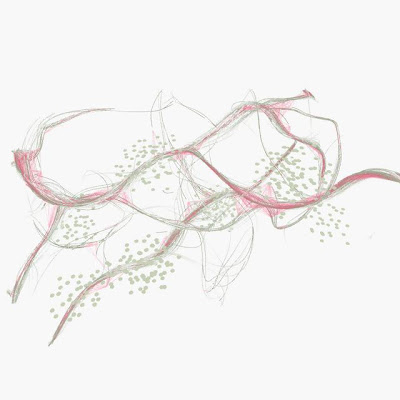 Individuals leave a meaningful trace in the environment (physical, virtual or conceptual...) that will inspire other individuals. Some will try to reproduce, others may be horrified...
What matters in this case is the meaning we attach to our actions.

So basically, an ermit has more than a right to exist, he is the leaving proof of a way of living, and his existence in other's minds can have huge impact.
With a subjective perspective, every individual (past, present or fictional) can represent a model, a set of values, etc...
Individuals aggregate meanings unto their cognitive processes more or less consciously.

The semantergic context already exists, we live in.
What's missing is tools to play with meanings.
And maybe also a "Semantic I".

Also, what's missing is tools to helps individuals control their own meanings, and not be slaves of other's meanings like "money", "government", "laws", etc...
All these social constructs are basically social contracts that have been signed something like a century ago at the very least, by individuals about which we can doubt about the underlying motivations of their actions...
These structures seem REAL but are not, and once we'll have the tools to play consciously with the tissue, the womb of society, ideas, innovations, love/hate... Then, lots will be possible, because the Context seems to play an important part in One's Choices.

We need to find a semantic trick or something so that anyone can get that meanings are relative and not absolute...

We can also consider logics, decency, rethoric and lots of other cognitive tools or social rules as evolutionary dead ends as they are responsible of most of semantic frictions.

Also, i consider the meaning "Truth' the Mother of semantic dementia. 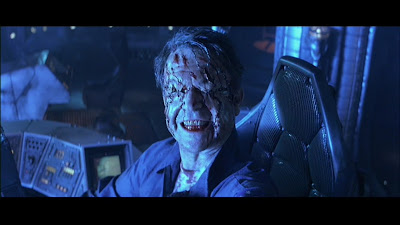 Discussing with Raffael about Life

Along my wanderings, i met Raffael, a Semantic Alchemist and Co-Creator of Realities.

We happened to continue the discussion started with Abdul, may Allah guide his Steps.
(hope the semantics are contextually right :) )


Thank you for a new perspective on "united we stand, divided/seperated we fall" - it has been mis-used a lot in a narrow-minded (group-based/conflict-based, militaristic) context. However, seen from a higher perspective, it could read :"united [with ourselves as all-that-is] we stand [connected through love within the joy of life], separated [from ourselves as all-that-is] we fall [into despair as we feel isolated and can't derive a higher purpose of life]".

[N] = Nirgal
Thanks for the additions, this makes lots of sense.

[R]
How do you define spiritual worlds?

[N]
Well, at first it was only a willing to play with words. :)
Then i had to find a meaning to it, and it made sense.
This is the semantic alchemy formula i used :

[R]
What makes most sense to me is that creation is built on very few core principles such as those I mentioned in my poem : the Laws of Creation, to allow for most flexibility of co-creation for pretty much everything else - including any reflections in all realms whether perceived as physical or astral/spiritual.

The question is whether these rules apply to all-that-is, but answering with "yes" is what all re-ligious [meaning re-connection, same meaning as "yoga"] teachings point towards.

Especially if you consider that all-that-is IS all-that-is and so there is no-thing which does not exist.

If it were some-thing, it would exist within all-that-is?!

Nothing is no-thing - and the "undefineable" is the zero/source point from which every-thing is generated?

As I assume perceive everything to be consciousness, isn't there at least a cyclic relationship between the material and the astral/spiritual realm - and isn't this "ligne de démarcation" pretty arbitrary?

[N]
Well, i think that by material and spiritual i meant the potential of sentient being compared to what the beings we are composed of and/or affected by.
What we are made of can affect us as well as we can make the choice to modify, train, or destroy it.
The distinction i see is only about Choice, which happens with faster cycles with sentient consciousness and the ability to interact with self and the context, and modify both.

[R]
Is what we commonly refer to as the material world not simply the "consensus reality" we have chosen to believe/trust in?

[N]
I think this is partly true, but will soon become our daily reality. It already is in a sense.
We make our reality as we shape the world, and technology and engineering is mostly about accelerating the time between a Choice and a Result, as well as the scale and scope.
Our Choices become more and more important as their impact and consequences become more tangible, mostly thanks to communication systems and protocols.

[R]
As people start to believe/trust more in certain phenomena or beings, shouldn't they become more "tangible" automatically as their conscious intent allows them to emerge in their reality?

[N]
We already do that.
Books and words and stories have carried realities along the ages, and made happen lots of things, because these stories became stronger each time they have been shared and told.
What took thousands of years to happen on a global scale with words, took centuries with hand-written books, decades with printed books, years with press, hours with telegraph, instantly with radio and television...

And with internet ?
We are working together at a global scale, in real time.
Anyone can already create any reality and share it with the world instantly.
We'll just get better and better, and it's gonna get faster and faster.
For those who want to live that reality.
Publié par Nirgal à 11:33 PM No comments:

Discussing with Abdul about Life and God

Along my wanderings, i came to meet a man who praised Allah through the Prophet's Words.
As my Belief was mostly about Doubting, i was uncomfortable at first sharing thoughts with someone using words such as "belief", "God", Truth...
But soon enough Abdul opened an interesting Door in my belief system, and a semantic bridge between us.
After a minor misunderstanding about his academic studies, i confessed to Abdul :

"That doesn't matter to me at all, i see in you a splendid Co-Creator, and that's all that matter.

I use the term Co-Creator, because i think it is more relevant as our creations are semantic alchemies of what our Selves have perceived, both internally and externally.
Creation would be that first sound, that first word from which our Story unfolds. So we Co-Create, as We are the splendor of that image, and so we can Co-Create new Realities, I think this is what heavens are about.
Realising our unity and the Sacred in every aspect of existence.

Sharing these words with you is a miracle in so many aspects.
We are already New-Born Gods, we shape the world, we shake its foundations, and still we learn, and we're going faster.
The entire Universe plotted so that we can talk together, my Friend, my Brother.
I feel already thankful and my heart is full of gratitude.
Now it's up to us to give more to Life, more to the Universe, more to God.
United, we stand, separated we fall."

But a question remains :

Is "Creation" a memory of the first sound of the Universe, God or whatever ?

Or is it a memory of our first sound, the first articulated Word ?
Could this memory of the first meaningful Word so deeply intricate with our semantic existence that we consider a "Creation" necessary for the Universe to exist ?

Could it be our last Bias ?
Our last misconception about Life and the Universe ?
Our last shackles ?

A new Volunteer has joined netention's effort and is working on a Netention Telephony Integration System (NTIS). 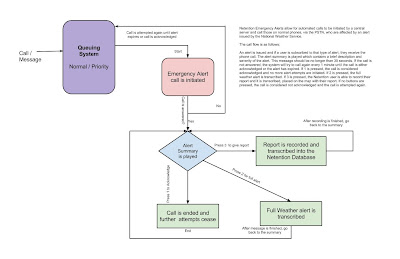 A girl walks alone in a dangerous place at night, the system has already warned her, as the place has been tagged as dangerous at night.
She is then ready to press a multi-position button on her smartphone or personal alarm/sensor or whatever gadget.
This button allows her to input in an instant the urgency of the danger and the felt quality of the danger (low to high).
The signal is sent through all available channels (phone call, sms, mesh network, wifi, bluetooth...) and received by every "superhero" that is nearby.
The system links the heroes together and suggests actions plans. While they get to the place and gather, they can communicate, organise, call backup through personal networks...
Call that fast organised milices or what you want, i'd say it's only caring and social responsibility enhanced by technological means.
The life of one is the responsibility of anyone who cares.
Those who don't give a damn and want to avoid danger can still avoid that reality. 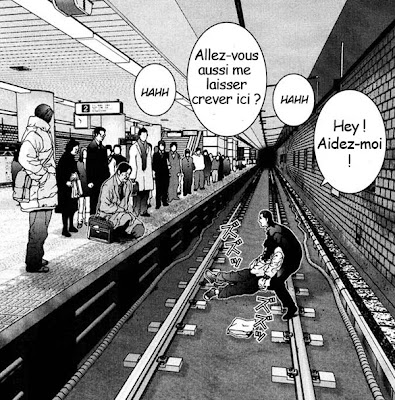 So, to make this work, almost every connection must be automated through netention.
A good user-experience (and maybe technology in general), should aim at lowering the time between a choice and an action.


This system will utilize Asterisk 11 to send out voice calls and SMS alerts to the PSTN. NTIS will act as a separate entity from NetentionJS. NTIS will host a webserver that will utilize the Asynchronous Javascript Asterisk Manager so Netention will be able to send messages to Asterisk’s manager API (AMI) using simple http get and/or posts. This is a dynamic API that is definable by programming the Asterisk dialplan to interact with it as desired.

NEW TOYS
(test it on CAN Instance) 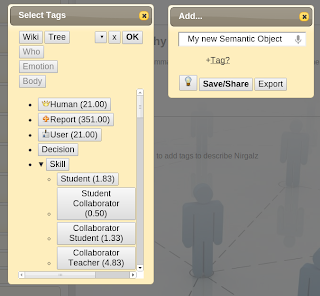 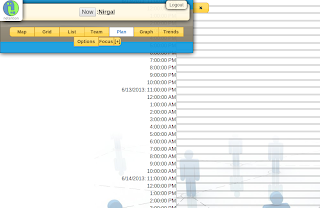 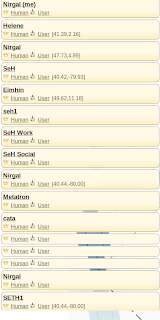 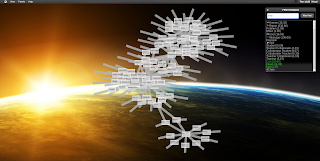 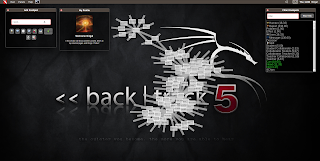 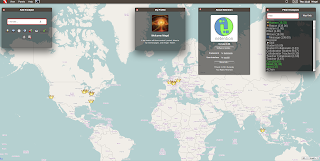 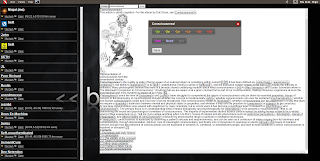 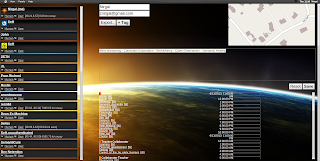